A Social Network That Actually PAYS YOU To Be Social???

But imagine a world where every time a social network made money from your content, you got paid. Wouldn’t that be a better, more fair world?

We now live in that world

Tsu.co is the first social network that actually pays you to create content and engage with your network. In fact, they share 90% of their ad revenue with their members.

And yes, you get royalties when the people you refer earn as well.

The site looks great, too! Check out what my Tsu page looks like:

To start with we thought it sounded like a scam or a pyramid scheme. So we started researching the site.

Big name sites like MacWorld, ZDNet and ABCNews have had favourable write-ups about it.

It also has a Wikipedia page. It started in September of 2014 and reached 1 million users in 5 weeks (it took Facebook 10 months to reach that number). Now, less than one year later, it has more than 5 million members.

But it’s not just famous people making money with Tsu!

In fact, an article at The New York Observer said that “one mother of four named Kimberly Hendersen began making hundreds of dollars every day when a video she posted of her signing her daughter to sleep went viral. Now, she has a record deal lined up.”

The way Tsu works is simple: the network understands that what makes them money is ad revenue.

The more people interacting on their site and seeing the ads and clicking through, the more money they make.

(Facebook is well aware of this, too, they just don’t pay you anything for making them billions of dollars even though you’re helping them do it.)

So to encourage you to do all of your social networking on Tsu instead of Facebook or the other networks, they decided to share that revenue with their members. Here’s an infographic showing how that works: 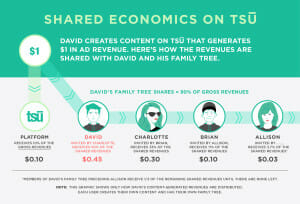 It just makes sense. The users are the ones making the network the money, so to encourage you to create compelling content that gets the ads on the network seen, the network pays you when your content reaches more people!

This is not a new concept. There are lots of sites that pay the people who create the content based on the page views and ad revenue. This is just the first social network to do it. And with 5+ million users and growing fast, it’s on a clear path to success.

But there’s a catch!

(Don’t worry, it’s not a big catch.) The “catch” is that you can only sign up for an account through somebody else. That’s logical, given the nature of Tsu’s business model.

Tsu holds serious appeal because it actually rewards me for being an active member. It will reward you, too!

It just makes more sense. If you’re going to be active on a social network, be active on the one that pays you to do so.

The 6 Degrees of Separation – My Connection To Royalty

Forget SEO – It Is A Total Waste Of Time

Finishing What You Start – The New Look Design For My Blog
We use cookies for various purposes, including analytics. By continuing to use the service, you agree to our use of cookies.